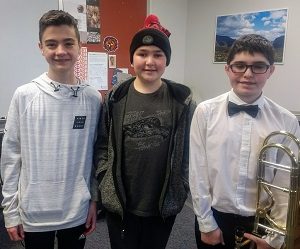 Among the many challenges of playing in a small music ensemble, Mitchell Beatch discovered this one right away: “In a bigger group like a band, it’s easier to hide. With an ensemble, you have to know your part.”

Beatch, a 7th grader at William Penn Middle School, is part of YOBC’s first-ever trombone ensemble, along with his colleagues, Kettner Hunter, an 8th grader at William Penn Middle School, and Dylan Waddell, an 8th grader at Unami Middle School. Coached by YOBC alumnus Bill Connors, who holds a Master of Music degree in Tuba Performance from the University of Denver, the ensemble meets every other week, providing the three students with the chance to learn leadership skills and develop their technical playing abilities. “It brings an additional challenge,” says Mitchell, “but not as big a challenge as moving up to the advanced division. It’s a good opportunity.”

While large groups like the Wind Symphony have conductors, ensemble players are on their own. They must learn to start together and choose a tempo and stick to it. They are responsible for dynamics, balance, phrasing, and playing the right rhythm, among other skills. Much like a sports team, if everyone doesn’t carry his weight, the outcome won’t be a success.

The challenges of small ensemble playing have helped the three students grow in many ways. For instance, Dylan says, “My articulation has gotten a lot better.” Mitchell, on the other hand, notes that his tone has improved over the course of the year.

Besides all the learning opportunities, playing in an ensemble is an enjoyable experience. “We play fun music, and it’s equal for everyone,” says Kettner. “When we’re done working on the music, Bill lets us randomly play new stuff. He lets us pick what we want to play and what we all agree on. It’s fun and not so serious which can be relieving.”

In addition to a master’s degree, Connors holds a Professional Studies Certificate from the Colburn Conservatory in Los Angeles and a Bachelor of Music from Ithaca College. In 2015, he earned 2nd place in the Brass Division of the Pasadena Showcase House Instrumental Solo Competition, and he has been a semi-finalist and finalist in several international tuba competitions. You can hear him play tuba and bass trombone on Aaron Tindall’s solo album, This Is My House.