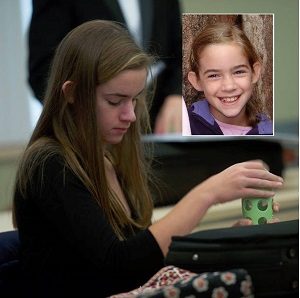 In the first issue of Keeping Tempo, in August 2009, we shone the first Student Spotlight on Kevyn DeWees. When auditions were held that spring for YOBC’s 2009–10 season, we auditioned a number of students for our newest string ensemble, Prima Strings. Kevyn was the first Prima Strings candidate to be accepted for our new junior ensemble. Now, nine years later, Kevyn is graduating and we thought it would be fun to check back with her at the end of her time in YOBC.

Kevyn is now a senior at the Academy of the New Church. She is currently a 1st violinist in the YOBC Symphony Orchestra. She started playing violin in second grade after learning about it in an introductory music class where she got to try out different instruments. “Of course, the quality of the instrument and playing back then were sub-par, but it got me hooked somehow!” Kevyn says.

She heard about YOBC through the string program at school at the time (Bryn Athyn Church School). Some more advanced students were already in YOBC so her teacher encouraged her to audition. “I wanted to join in order to have the opportunity to play with a larger group of people who loved to play music together,” she explained. In 2009, Kevyn reported that her audition was “really easy,” and she thought that the people were very welcoming and friendly.

Kevyn currently studies violin with Margaret Dziekonski at Settlement Music School. Aside from private lessons, she is also part of the William A. Loeb String Quartet (also at Settlement) coached by Jean Shook. “And I can’t forget school!” she adds. “I play my violin in ANC’s Instrumental Ensemble.”

Kevyn plans to pursue a neuroscience major in college, “but I have yet to see where that will take me!” she admits. She also hopes to keep playing violin “in any capacity that seems fulfilling.”

Joining Prima Strings, Kevyn told us that she was looking forward to beginning rehearsals at YOBC where she hoped to meet new people like her, who also love to play music. Upon leaving this spring, she says, “I would just like to thank YOBC for everything. Yes, my Sunday afternoons were always filled with rehearsals, but the memories and opportunities were worth every minute.”