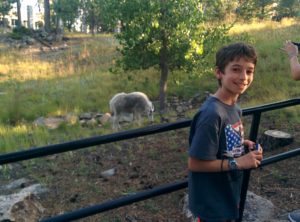 Ethan Crowell is a sixth grader at Goodnoe Elementary School. When he was three, he went to an arts camp called Burn Brae Day Camp in Dresher, Pennsylvania. At the camp Ethan tried a lot of different things, and decided he loved playing musical instruments such as the “wonderful violin.” At the camp, the violin Ethan used was tiny. “It was adorable,” he says. From then on, he has loved the instrument and has been playing it for eight years so far.

Ethan has some older friends who were in YOBC a few years ago, and he heard about the group from them. “I thought it would be a good experience, so I tried out,” he says. “I was nervous, because it was my first time auditioning for something, and I was really excited when I found out that I made it in!”

Ethan is also in the Council Rock District Orchestra and loves playing his instrument there, at YOBC, in the regular school orchestra, and at home. He has also been playing trombone for three years now for his school band.

“When I’m not playing the violin or trombone, I’m usually singing, playing piano, banging on a homemade drum set, or just playing with sound in general.” Ethan’s parents said

that when he was younger, if they wanted him to learn something important, they would sing it to him and he would never forget it. “Music is really important to me,” he explains.

Besides making music, one of Ethan’s other favorite things to do is gymnastics. He is on the High Performance Gymnastics Training Center team in Chalfont in level 4. The team competes in different states, and Ethan competes in all of the events, including parallel bars, high bar, floor, pommel horse (“my favorite”), rings, and vault. Ethan’s dad, Ryan, says, “I would say that Ethan is upside down about half of the time we see him, doing handstands, flips, etc.” He came in first place in his division in the pommel horse and third place in his division overall at a recent meet in York.

In the future, Ethan wants to be a zoologist or an entomologist who takes care of and studies animals. He has been studying and raising butterflies for the last several years by finding their host plants, waiting for the caterpillars to show up, nursing them through the transition to butterfly stage, watching them lay eggs, and starting all over.

This year, at the fall YOBC concert something crazy happened to Ethan. “My D string totally unwound during our first song on stage for some reason. I had to fake using the string and continue playing like nothing was wrong. I want to let everyone know that it’s OK if your strings get out of tune or if something else goes wrong—don’t worry because Mr. Oettle can fix it! He quickly retuned my instrument between songs and the show went on. Though you may be nervous, you can still play, so keep that in mind.”