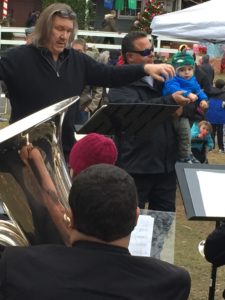 Most YOBC families know David Osenberg as a YOBC dad. Luke graduated in 2014 and Isaac currently plays clarinet in Fanfare Winds and Symphony Orchestra. They may also recognize him as the emcee of YOBC concerts — a role he has performed for a decade. His voice may be familiar as an on-air personality and music director at WWFM, where his Credenza program has twice been awarded the ASCAP Deems Taylor/Virgil Thomson Radio Broadcast Award. He also leads YOBC’s Brass Ensemble. But on February 10, 2018, attendees at YOBC’s Swing, Swing, Swing benefit will see yet another hat David wears: leader of The Straight Ahead Big Band which will provide live music for YOBC’s 1940s dance party.

David formed the group almost 15 years ago as a way to keep playing the music he loved. He played big band music all through high school and college in the Chicago area. So in 2004 he raided his alma mater’s music library and collected 70 charts to start practicing. The 22-piece band is made up of music teachers and other musicians who, like him, just enjoy playing in a big band. Six of the current members have been in the band since day one.

The group started out rehearsing casually at Hope Lutheran Church in Levittown where they would get together every 4–6 weeks to play around. After they got a regular summer gig in Hatboro, they decided they needed to practice twice a month. They moved from Hope Lutheran to a space at Mercer County (NJ) Community College, but looked for a rehearsal venue in Bucks County so the musicians didn’t have to travel so far to practice.

David learned that George School in Newtown had no jazz program. Their music teacher, Steve Heitzer, did some jazz combos with interested students and taught some improv, but it was difficult for students there to find time to study and take music lessons. David offered in exchange for a rehearsal space to allow interested students to sit in with his big band and play as much as they were comfortable playing. 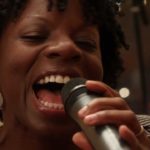 After about two years at George School, David discovered that an English teacher there, Shantel Hubert, was a professional singer. He invited her to sing, and she has now become the face of the band.

The group is available for events and plays a variety of gigs for nonprofit groups and galas. They offer a wide range of music styles from swing, to rock, latin, and many others. Those 70 charts have now grown to over 5000, and David programs performances by theme. They have “songbooks” for love, travel, and any other themes event organizers choose. For YOBC’s Swing Swing Swing party, David’s band will play lots of the old big band standards to keep everyone on their toes. Some YOBC students will be joining the big band at the benefit.So make sure to get your tickets, shine your dancing shoes and come out to be-bop with the best.