Crossing Classical Boundaries is a musical exploration that started with a simple idea: what could a non-classical musician create, in a broadly defined, yet true-to-form classical idiom if given access to a full symphony orchestra or a full symphonic band? The ideal outcome would be a concert that stretches musical boundaries for both the artist and YOBC students. YOBC offers Crossing Cultural Boundaries to bring in artists who take classical music beyond its traditional boundaries to explore new forms of music. 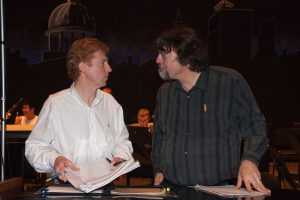 To inaugurate YOBC’s Crossing Classical Boundaries series, Chris Brubeck and his group Triple Play were YOBC’s guest artists at our 20th anniversary celebration in May 2011. Chris Brubeck is recognized as an innovative jazz/rock performer and an award-winning composer. He plays numerous instruments and in the past few decades has earned acclaim as a composer, performer, and leader of his own groups. Triple Play is the name given to three outstanding and versatile musicians, Peter Madcat Ruth (on harmonica, guitar, jaw harp, percussion, and vocals), Joel Brown (folk and classical acoustic guitar and vocals), and Chris Brubeck (electric bass, bass trombone, piano, and vocals). Collectively they bring a rare level of joy, virtuosity, and American spirit to the folk, blues, jazz, and classical music they perform. At Patriot’s Theater at the Trenton War Memorial, Brubeck and Triple Play joined the YOBC Wind Ensemble in a performance of his own Concerto for Bass Trombone and Orchestra, and the YOBC Symphony Orchestra as they performed some works written or performed by his father, Dave Brubeck: Blue Rondo à la Turk, Unsquare Dance, and Take Five. 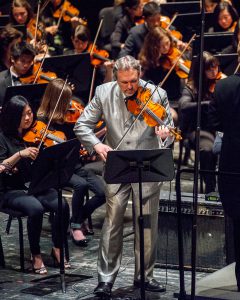 Mark O’Connor is an American classical, bluegrass, jazz and country violinist, fiddler, composer and music teacher. O’Connor’s music is wide-ranging and critically acclaimed, and he has received numerous awards for both his playing and his composition. As The Los Angeles Times recently noted, he has “crossed over so many boundaries, that his style is purely personal.” In May 2013, O’Connor captivated the audience at Patriot’s Theater in the Trenton War Memorial with his unique fusion of jazz, bluegrass, folk, and classical music. The GRAMMY award–winning fiddler performed his composition, The Improvised Violin Concerto with YOBC’s Symphony Orchestra. At over 30 minutes in length, The Improvised Violin Concerto features the longest improvisation ever called for in a classical setting. O’Connor also performed selections from his American Songbook. The concert finale included all of YOBC’s string students (all levels), musicians from the Princeton High School Orchestra, and Westminster Choir College — over 200 musicians playing traditional American folk music, the cornerstone O’Connor’s “New American School of String Playing.” 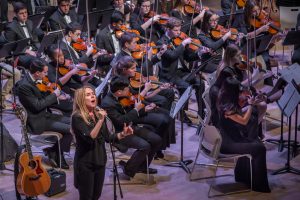 In May 2016, singer-songwriter Mary Fahl headlined a concert with YOBC’s Symphony Orchestra and Fanfare Winds. The season-capping concert took place in the Life Sciences Auditorium at Delaware Valley University in Doylestown. Mary Fahl achieved fame in the mid-1990s as the lead singer and co-founder of a folk-rock/adult alternative group, October Project. Her musical inspirations for her solo career have expanded to include classical, medieval, and world music. Her expressive, transcendent voice has been described as “a voice for the gods” (Boston Globe) and “a powerful, beautifully proportioned contralto” (Variety). Mary’s music appeals to a wide range of enthusiasts.